50 Arrested in College Admissions Scandal: Save My Kid From ASU?! 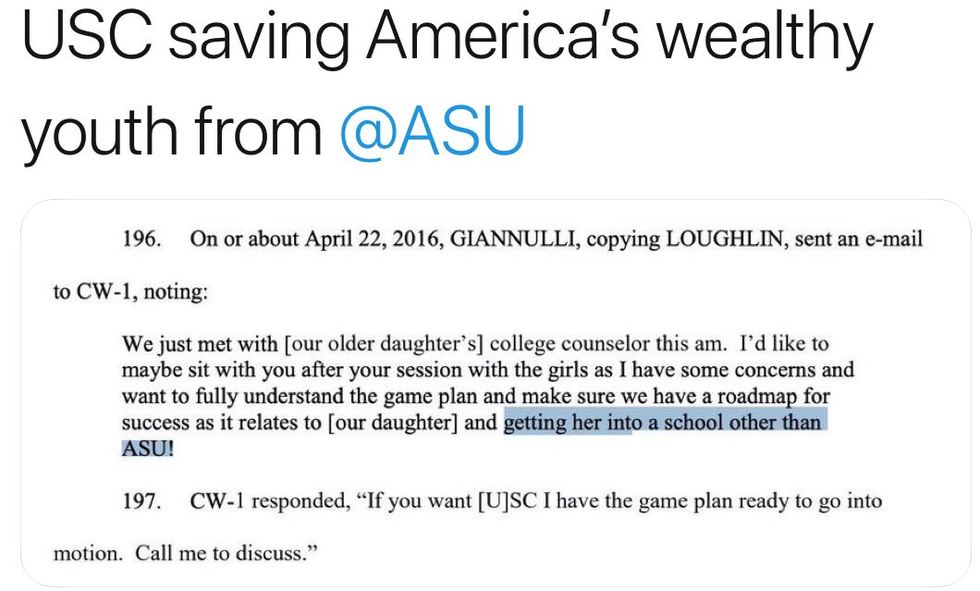 I can't get enough of the college admissions scandal that broke today. It's disgusting. It's hard enough for kids to navigate the stress of college applications without entitled, meddling parents stealing opportunity.  All of this is an insult to the basic issues of fairness that these schools advertise that they hold dear.

Fifty people -- celebrities, CEOs, admissions officers, counselors, and more -- were arrested on federal charges today.  The United States accuses them of mail fraud and honest services fraud.  These arrests were spurred by the cooperation of key, complicit players. Some of whom plead guilty today, as well. You can read the entire, unsealed probable cause affidavit here, starting at page 66.  And it's amazing, shocking, and compelling -- just pick any page or paragraph. It's fantastical, and a reminder of how entitled and unethical people can be -- including beloved actors and fashion icons. Believing that the rules don't apply to them, they deny hard-working, honest kids the chance to compete for admission on an even field.

Honest services fraud has been in the news lately.  It is the crime at the heart of the ongoing NCAA basketball bribery scandal. The statute is a mere 28 words, "For the purposes of this chapter, the term 'scheme or artifice to defraud' includes a scheme or artifice to deprive another of the intangible right of honest services."  The law essentially criminalizes a wide range of unethical behavior.  It is most typically used to prosecute public employees and elected officials. But has also been used to punish private behavior. Some bold face names from the news have fallen as a result of this statute.  Enron CEO's Jeff Skilling, lobbyist Jack Abramoff, and Illinois governor George Ryan all went to prison for violating this statute.  More recently, a college basketball coach who deprived his school of its right to honest service by violating NCAA rules and church officials covering up sexual abuse by priests have found themselves on the horns of this statute.  Honest services fraud has a long, and at times ambiguous reach.  And that has made its application sometimes controversial.

Today, dozens of rich parents, and their conspirators, were arrested for this crime.  Perhaps the epitome of the scandal is this headline, "Stanford's Head Sailing Coach Terminated After Pleading Guilty to Accepting Six Figure Bribe."  I had no idea sailing was a collegiate sport -- and I have every ESPN available.  Even the Ocho. But today we learned that for a hefty bribe, a kid who couldn't tie a square knot could pose as a sailor, buy a coveted spot at one of the most selective colleges in the nation, and never set foot on a boat.

At the center of the scandal is William Singer, who ran Edge College and Career Network, LLC and wrote a book that was glowingly reviewed, "This book is a must.  Allow Singer to wave his magic pixy dust all over your life.  You will be changed for the better."

Prosecutors allege that parents paid Singer about $25 million over 8 years to help their kids get acceptance letters from top schools.  While most payments were in the high six figures, some parents paid over $6 million for "guaranteed admission."

All told, two SAT/ACT administrators, one exam proctor, nine coaches at elite universities, and 33 parents and a few others, were arrested.  You can read a summary of the charges here.

The fraud breaks down into two schemes.  Some parents and co-conspirators paid money for fake test scores - "The College Entrance Exam Cheating Scheme."  Participating students - it's clear that some kids were unknowing participants who actually thought they achieved high scores - were allowed to take standardized tests in private settings, given extra time, and the answer key to the SAT and ACT.  In some cases, a third party test-taker took the tests under a student's name. 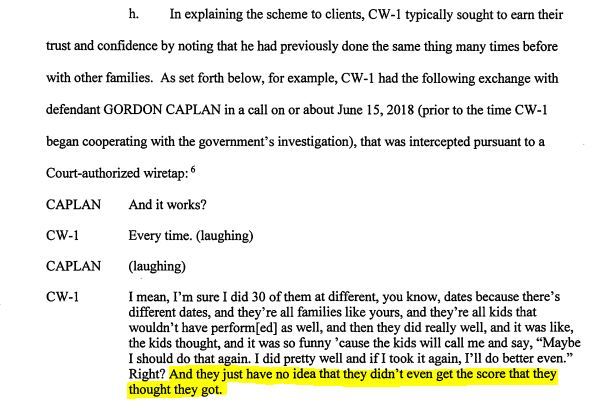 The second scheme involved an elaborate college athletic recruiting fraud - "The College Recruitment Scheme."  Parents utilized what Singer called his "side door" into elite colleges.  In a quid pro quo arrangement, parents wrote big checks to a charitable foundation Singer controlled.  He would then funnel those funds to particular college coaches and athletic departments.  The donations would be cloaked by Singer's foundation, concealing the true source of the money.  In exchange for the payments, the college coaches would designate the parents' kids as recruited athletes -- regardless of their athletic ability and in some cases even participation - thereby facilitating admission to the universities.

In one stranger than fiction anecdote, the Stanford sailing coach had to claw back two previously promised spots from Singer's clients.  The reason -- he needed to get some actual sailors into the program.  Otherwise, he feared administrators would figure something was up when he had nobody to man the boats.

It wasn't enough for these Richie Rich's to scam their kids' in.  They also wanted a tax deduction on their "donations" to Singer's 501(c)(3) non-profit that was set up to benefit underprivileged kids in Florida.  They wanted - and received - tax letters that said, "no goods and services were exchanged" for their money.  That was not true.  And then they took tax deductions on their bribe payments.

Selective universities typically designate a certain number of spots in each admitted class to the athletics department.  Coaches then designated students for those openings.  While admission may not be guaranteed, the requirements for admission are lower and the likelihood of admission are much greater than for the general applying pool.  These elite schools typically reserve about 150-180 seats for the athletic department.

Did it work?  A girl who didn't play soccer became a star recruit at Yale -- for $1.2 million.  Twins, with no experience rowing crew, earned a spots in a USC boat for a cool $500,000.  The affidavit is full of these stories.  Fake recruiting profiles, complete with clip art and Photoshopped pictures were posted online to round out the rouse. There are dozens of detailed examples laid out with recordings and emails.  Here is what Singer said about the scam: 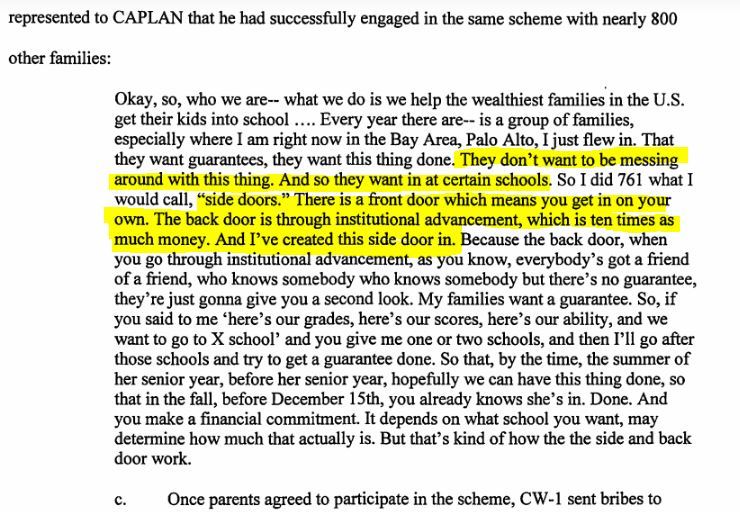 Singer was arrested earlier and has become a cooperating witness.  In a recorded calls, he laughs as he assures his rich clientele that his side door process is guaranteed to work. Thought out the 536 paragraph probable cause affidavit, an FBI special agent walks through a disgusting, dishonest side to college admissions and athletics implicating some of the most popular and prestigious schools in the country - the University of Southern California, Georgetown, Stanford, University of Texas, Wake Forest, and Yale make this ignoble list.

This indictment and affidavit were unsealed this morning.  By this evening, major developments had occurred.  USC fired its senior associate athletics director, Donna Heingel who featured heavily in the scheme, and it's legendary water polo coach, Jovan Vavic.  Actresses Felicity Huffman and Lori Loughlin, along with fashion designer Mossimo Guannulli and winemaker Agustin Huneeus, Jr. were all arrested today.  Guannulli's bond was set at $1,000,000.  Many universities are painting themselves as the victims of an organized criminal plan.  But I am curious to see what we learn about the depth of institutional knowledge and participation.

In the end, I think if the parents had encouraged their kids to have a fraction of the initiative, creativity, and dedication they showed in this fraud, those kids would be happily and honestly enrolled a great schools. 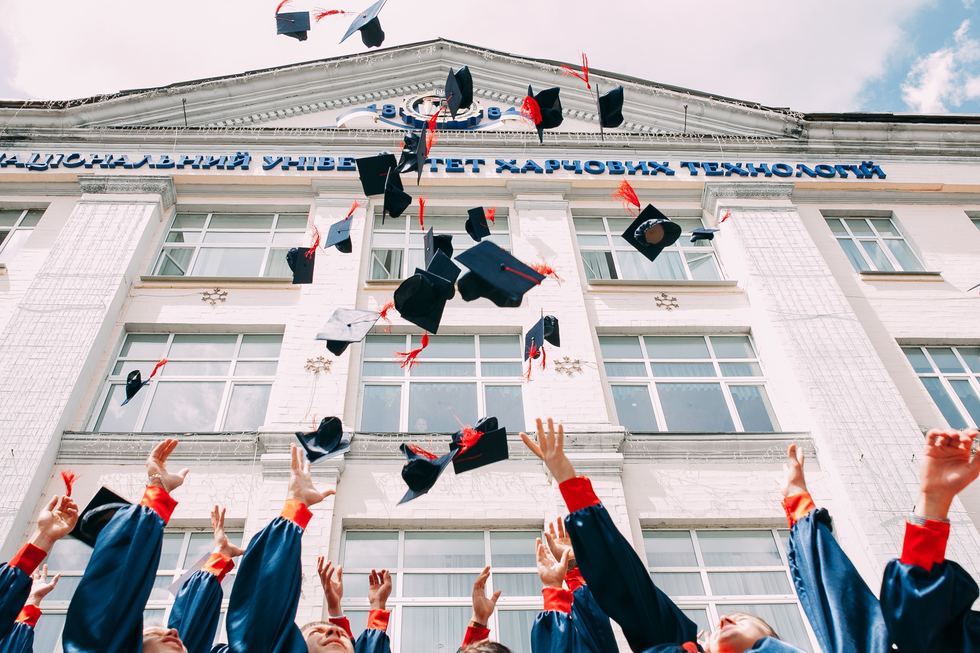 This is really unsettling to hear about. Thanks for doing the reading and analysis for us, Dev!