Surrounded by Arizonans touched by the tragedy of distracted driving, Governor Doug Ducey signed into law Arizona's statewide prohibition on using electronic devices while driving.  This texting while driving ban has been brewing in the legislature for 12 years.  In 2007, then Representative Steve Farley (and current Tucson mayoral candidate) introduced the first bill to ban texting while driving. It's been a long road from then to now -- and many advocates have carried the flag. 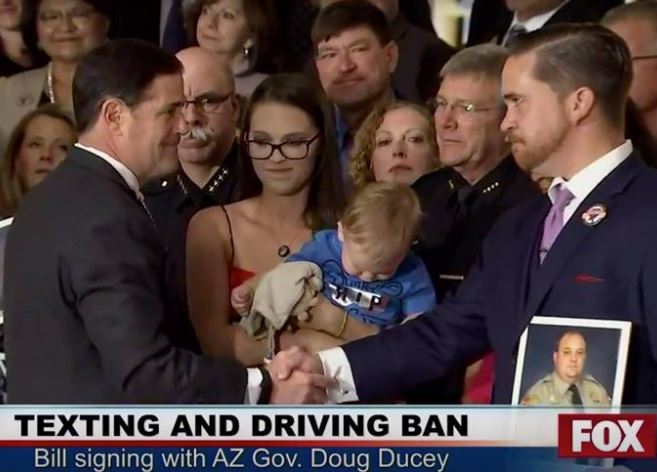 Most notably, and perhaps most recognizably, is our friend and former client Brendan Lyons.  Brendan and his fiancee were out for a birthday bike ride when they were run down by a driver who momentarily reached to answer his phone.  The aftermath of the pickup truck/bike collision cost Brendan his career as a firefighter and first responder.

Almost as soon as he could sit up in his hospital bed, Brendan began his campaign to end distracted driving and to educate motorists and bicyclists on the importance of sharing the road, awareness, and respect.  He has been a tireless advocate - helping others who are the victims of distracted driving and an indefatigable presence in the offices and halls of state and local government.  We are very proud of our friend, Brendan.  His hard work and advocacy will save lives and has made Arizona roads safer for all of us.

From Howard Schultz and the Arizona Daily Star, here is what you need to know:

WHEN DOES IT TAKE EFFECT?

While the law doesn't go into effect until Jan. 1, 2021, this doesn't preclude an offending motorist from being stopped between now and then, though police can issue only warnings for violating the new law until the effective date.

WHAT WILL BE FORBIDDEN?

The law will make it illegal to “physically hold” or “support with any part of the body” any cellphone or other portable wireless communication device while operating a motor vehicle. There was some debate — and no clear answer — on what constitutes “support” of a phone, whether that means in the lap, in the pocket or elsewhere. But from a practical standpoint, if it's in a lap it is unlikely that a police officer would see it there and pull someone over. The law bans not only chatting on the phone but writing, sending and reading text messages, emails, instant messages or internet data.

WHAT ARE THE KEY EXCEPTIONS?

Drivers can make calls if they use earpieces, headphones or any type of device worn on a wrist to conduct voice communications. Vehicles with built-in interfaces with cellphones also are exempt as long as they can be operated with minimal interactions, meaning simply pressing a button to active or deactivate. People also can “read” texts if these are translated into voice. And they can send texts if done through voice commands. A phone's maps and GPS can be used if in a hands-free mode.

WHAT ABOUT OTHER TYPES OF DEVICES?

The same restrictions on holding a cellphone also apply to any “stand-alone electronic device.” That means anything with stored audio or video. So, no hanging on to the phone while listening to previously recorded podcasts or watching “Game of Thrones.”

WHAT ABOUT WATCHING LIVE TV?

That already is illegal. But the new law clarifies that the statute does not apply to mapping services that update images as well as to cars and trucks with built-in video screens that provide information about the vehicle. The legislation also adds a provision designed to protect people who have dash cams and similar devices that continuously record what's going on, either in the vehicle or on the road.

ARE THERE OTHER TYPES OF OPERATIONS THAT ARE NOT SUBJECT TO THE LAW?

Motorists can use a cellphone to “report illegal activity or summon emergency help.” Also not subject to the new restrictions are licensed amateur radio operators and fleet drivers with commercial licenses communicating with a dispatcher.

WHAT ABOUT WHEN I COME TO A STOP?

Motorists who are parked are exempt and can call and text at will. Ditto if you're at a stoplight or waiting for a train to clear a railroad crossing. But a stop sign doesn't count. Nor does being stopped for a school bus.

WHAT ARE THE FINES?

A first offense carries a minimum fine of $75, up to $149. Subsequent violations result in fines of at least $150 and no more than $250. But the offenses accumulate no points on a motorist's license. There is an exception: Licenses can be suspended if someone is violating the new law and causes a serious injury or death.

BUT WHAT ABOUT ALL THOSE EXISTING LOCAL LAWS?

Those remain in effect and can still be enforced, including provisions that are stricter than what's in this new law. So if a local ordinance has no exception for stoplights, motorists can still be cited. But as of Jan. 1, 2021, any provision that does not mirror the state law will disappear.

WHAT ABOUT THE “DISTRACTED DRIVING” LAW?

That is a separate bill that went to Ducey on Monday and allows police to stop and cite someone if they are doing something other than driving, whether texting or eating a ham sandwich, and it creates an immediate hazard or the motorist does not exercise reasonable control of the vehicle. That measure, if approved, would take effect later this summer. Ducey said he is still reviewing that measure.