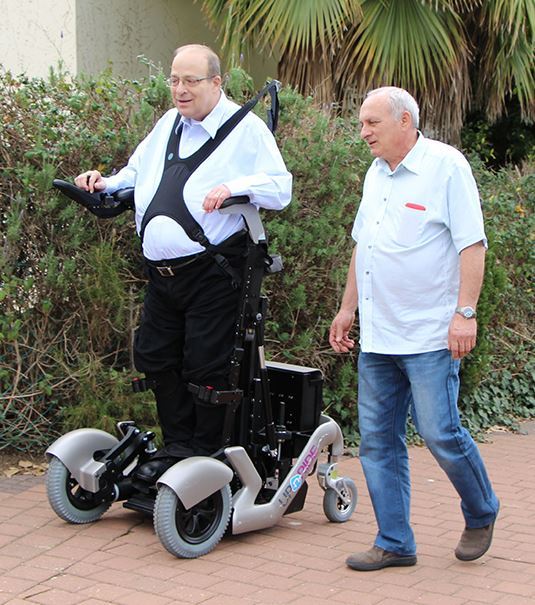 An Israeli company is launching a groundbreaking, self-stabilizing wheelchair that allows users to maneuver in a standing position.  The device, from UPnRide Robotics, uses a gyroscope similar to the system found in two-wheeled Segway and self-stabilizing software.  With these tools, a paralyzed individual can navigate over uneven terrain and join conversations -- face to face -- with people standing up.

The device will be officially unveiled at a medical conference in Germany next month.  The maker hopes it will be available to the public in 2017.  But before then, UPnRIDE needs to pass two clinical trials to get regulatory approval and ensure that health insurance companies can assist with the cost.

The CEO of UPnRIDE, Amit Goffer, has been confined to a wheelchair since an ATV crash in 1997.  He says that the new chair is revolutionary. "The dignity, self-esteem...to feel like part of society again, the core of society, not the fringe of society - the psychological effect is dramatic."

For people with serious spinal cord injuries, the act of standing also helps stave off cardiovascular, respiratory and other problems that can arise, said Gabi Zeilig, director of the neurological rehabilitation department at Israel's Sheba Medical Center.

"The (UPnRIDE) idea is fascinating," he said. "There are devices today to move from one place to another, but for short distances and never on a sloped ground."

High end wheelchairs cost between $15,000-$50,000.  UPnRIDE is targeting somewhere "in the middle" as the cost of its standing chair.

We are starting to work with our life care planners and doctors to investigate the appropriateness of this new technology for our paralyzed clients.

You can learn more about the company and watch a video here.