Why Can't I Sign Up for Draft Kings? (And Can You Make the Ads Stop?!) 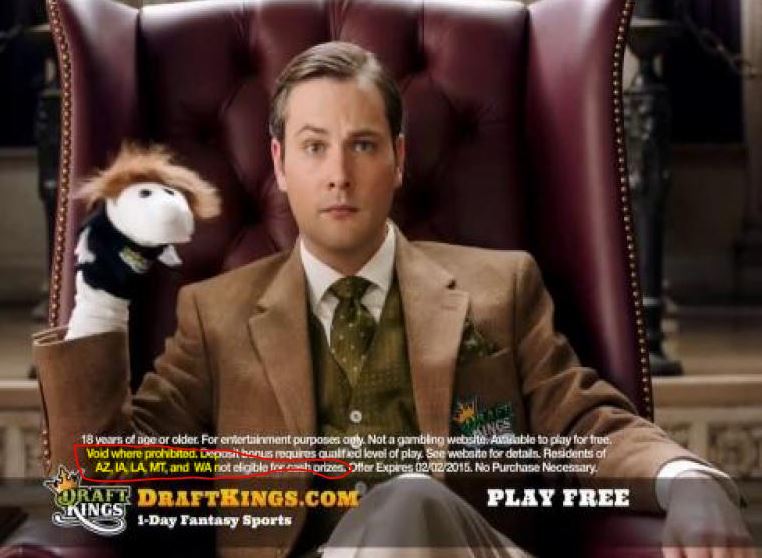 The allure of fantasy sports has captured everyone's imagination.  Suddenly even casual sports fans are speaking the language of metrics and moneyball. My neighbor's kid is 12 and in three fantasy leagues.  What was once the realm of die-hards looking to geek out on sports has now gone mainstream...way mainstream.  Families have fantasy leagues where the winner gets to pick a celebratory dinner at season's end (Peter Piper Pizza, anyone?!), and Vegas is crawling with groups of friends in town for their pre-season drafts.

Never one to sit by and let a phenomenon pass it by, the internet has jumped all over the fantasy game and gone all in.  No doubt you have been inundated by the never-ending ads for Draft Kinds and Fan Duel, the two leading online fantasy sports experiences.  You can't turn on the TV or listen to the radio without them screaming at you. Estimates are that these two companies have spent over $100,000,000 on advertising this year, but that pales in comparison to the nearly $18 billion (with a B) in entry fees that experts predict they will rake in by 2020.  The potential is so great that the NBA and Major League Baseball have been early investors.  The bear on the block, the NFL, has yet to jump in as an organization, but that hasn't stopped owners like Jerry Jones and Robert Kraft from making substantial personal investments.

But is this online activity legal?  Any why can't Arizonans participate?

Several states, including California, New Jersey and Massachusetts, where DraftKings is based, are considering legislation that would place strict regulations and licensing on daily fantasy sports enterprises, which would affect the future of online fantasy gaming. There have even been calls for congressional hearings on the matter because lawmakers are concerned the lines have been blurred between sports and online wagering.

Nevada's gaming commission seized on some archived comments by DraftKings CEO Jason Robins where he compared his site to a casino and described the concept as a mashup between poker and fantasy sports as it seeks to force both Draft Kings and Fan Duel to get a state gaming license or get out of Nevada.

For now, the concept is deemed legal in most states under a loophole in the federal ban on online gambling because daily sports fantasy has been classified by law as a game of skill, not a game of chance.  To some that is a tortured reading of the law, and in Arizona and four other states (Montana, Washington, Iowa and Louisiana), the state rules are unfriendly enough to have kept them out at the border.  If you have an Arizona zip code, you simply cannot open an online account.

Arizona's Department of Gaming released a statement last week that makes it crystal clear -- in the Department's view, online fantasy gaming is illegal in Arizona.  Even if you try to game the system with a fake address, it's unlikely that you would ever seen any of your winnings.  And, according to Amanda Jacinto, the Department's public information officer, you're facing jail time and serious fines if you get caught.

A Bill that attempted to open up Arizona to online fantasy gaming did work its way through the Legislature last session.  Senate Bill 1468 would have allowed players in Arizona to partake in fantasy sports competitions offering a prize. However, that bill did not pass amid concerns the legislation would have implications on the Arizona Tribal-State Gaming Compacts, which were approved by Arizona voters in 2002.

For now, if you live in Arizona, you have to put up with the neverending ads, but you can't play.  Though, from what I have read about the actual successes of real people playing, that is not such a bad thing.