William B. Morris Institute for Justice Honors Hegland and Silverman

The William B. Morris Institute for Justice is a legal organization dedicated to protecting the rights of low-income Arizonans.  For a while I shared an office with Mr. Morris, and as a young lawyer I was struck by his dedication and generosity.  Last night two of my heroes, both my former law professors, Kenny Hegland and Andy Silverman, were recognized by the Morris Institute with its Lifetime Achievement Award. I was asked to say a few words about Professor Silverman.   I was honored to do it. This is what I said...

Before I talk about Andy Silverman, I want to say one thing about Kenny Hegland.  Make no mistake, these two are my heroes.  I didn't realize it in 1994 when I sat in Prof. Hegland's contracts class – pulling my hair out -- trying to decipher schadenfreude, hubris and turtles all the way down from offer, acceptance and consideration as a first year.  But two experiences with him book end and frame my law school experience and my world view.  First year (first day?)  Hegland asks the class, “Who wants to work in a big law firm.”  Almost all the hands shoot up, mine too.  With a smile he asks what that means, and not one person answers.  It wasn't a challenge to the concept of big firms.  It was a challenge to us to know what we were getting into, where we would be happy, make a difference and live up to our best potential.  Third year, Law and Humanities – a class that should be required for all.  It provided a wonderful orientation to a lawyers' role in society.

It's always been about the students and the causes for Andy.  Walk into the law school and you felt his dedication and love.  Frankly, the law school's personality was in Andy's (and Hegland's) image – top quality but approachable.

I never took a class from Professor Silverman.  Rather I watched his example and learned from it.  A generation of lawyers – and the people we help – owe a debt to Andy for teaching us that being a lawyer is a tremendous responsibility.  We take people's problems, often heart stopping problems – and help them sometimes against tremendous odds and even public opinion.

A pony tail, plaid shirt and cool guy attitude belie a lifetime of work to improve access to justice in Arizona.  Paraphrasing Andy's friend, Larry Hammond, it's difficult to imagine the concept of justice in Arizona without Andy…and thank God we don't have to.

He came to The University of Arizona College of Law in 1970 from the Maricopa County Attorney's Office of all places.  He started as a Clinical Professor and Director of Clinical Studies and in 2001 became the Joseph M. Livermore Professor of Law.  He is reportedly “retired” from the College of Law but his service to the school, students and the community continues.

Andy has worked inside the system as a participant and outside as a benevolent agitator.  Name a program or group tasked with improving something – at the UA, dealing with justice issues or touching Arizona – and Andy Silverman has a connection to it.

The State Bar has called on Andy to serve on more committees than I can count, and we are all the better for it.

In 1995 OJ Simpson's trial was the talk of the law school.  Johnny Cochran and Robert Shapiro – in their tailored suits -- ate up most of the coverage.  But the lawyer who really shined to those who paid attention was Barry Scheck.  He was in charge of the scientific evidence and his week-long cross examination of LA county's criminologist remains one of the best ever.  It's not surprising that Professors Silverman and Scheck shared a vision.

Today most of Andy's press comes not from being arrested on campus – sometimes with Hegland – but from freeing innocent men and women from prison through the Arizona Justice Project. 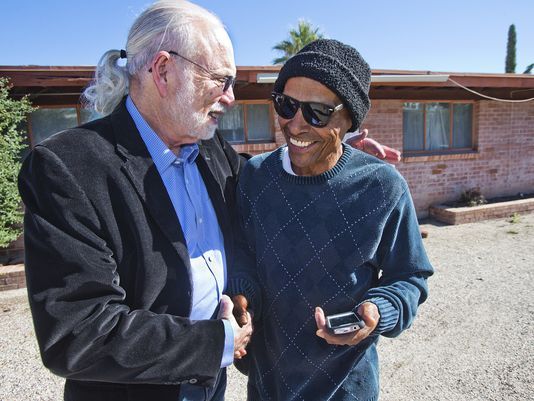 The story of Louis Taylor and the Pioneer Hotel fire has been the most recently celebrated case – a victory that came after a decade of hard work lead by Andy.  But the list is long – Donna Bennett, Betty Smithey and over a dozen others.  Smithey's case illustrates Andy's perseverance.   She was a woman on death row for allegedly killing her 15 month old child 1963.  Andy worked her case for nearly 40 years – through the courts, Clemency Board Reviews, and appeals to three governors.  It was finally Gov. Brewer who granted clemency in 2012.  When she was released, after being in prison for 49 years, Betty was Arizona's longest serving female prisoner.

Andy does not just work these cases.  They become part of who he is and of course, he becomes tied to his clients.  And because so many have been away for so long, he becomes an essential lifeline – helping these folks as they take their uncertain steps back into society.

It's fitting that the Morris Institute is recognizing Andy for a lifetime of accomplishments.  He is the personification of its mission --- working to fix systemic problems that hurt low income Arizonans – little guys doing big things.  But I always hesitate when I see lifetime achievement awards being given during a lifetime.  I worry that it will encourage resting on laurels.  But as Kanye West tells us, “If you admire somebody you should go on ahead and tell ‘em.  People never get the flowers while they can still smell ‘em.”

We should have no concern that this will slow Andy down, and given his humility and grace, he will let us celebrate him tonight and forget about this tomorrow – back doing his great work.

We should not let this celebration pass without stepping back and appreciating Andy's family.  Starr and their two kids – Adam and Brooke.  I know Brooke pretty well, and in all the best ways she is her parents' daughter.  No doubt the work Andy has undertaken hasn't always been easy – and his efforts and successes are clearly those of his family, too.  There could hardly be a more devoted husband and father and their reciprocal relationship is a beacon to many more folks than just my wife, Olivia, and me.

Congratulations, power to you all and Peace, Andy.